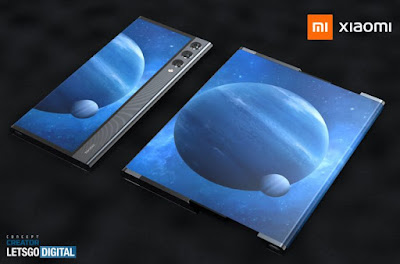 Last month, OPPO X 2021 was launched as the world’s first rollable concept smartphone. On the other hand, LG has also confirmed to release such a device next year as part of the ‘Explorer Project’. Now, a design patent for a Xiaomi smartphone with a similar form factor has been published.

Beijing Xiaomi Mobile Software filed this patent with the USPTO (United States Patent and Trademark Office) in late 2019. Patent entitled ‘ This terminal with flexible screen’Â was then approved on October 29, 2020, and even published in the WIPO (World Intellectual Property Office) database.

According to the patent documents, the design of this smartphone includes a flexible foldable panel and a secondary normal display on the back. The foldable screen present in this phone can be extended up to 200% in width. Therefore, the device can also be used as a tablet.

has the option to use both screens at the same time.

Furthermore, since patents are all about user experience and durability, design sketches don’t show anything else. That’s why LetsGoDigital, the publication that discovered this patent, partnered with Concept Creator (Jermaine Smit) to create the 3D rendering.

Since the original sketch was barebones, the designer has added a vertically aligned triple camera setup along with an LED flash inspired by the Mi Mix Alpha. In addition, the rendering also includes the ‘Xiaomi’ branding.

Having said that, we think that there is a possibility that Xiaomi will showcase a smartphone like a concept. But I’m not sure if it will end up in the hands of consumers.