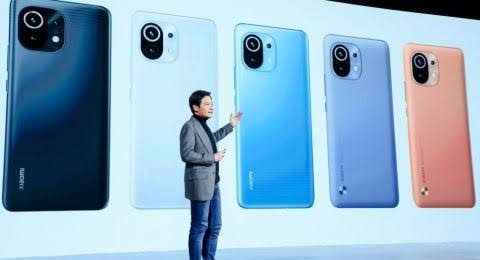 Xiaomi Mi 11 features a four-curved design – curved screen and curved back – for comfort when grasped. Lighter and thinner than the Mi 10 with a weight of 196 grams and a thickness of 8.06 millimeters.

The phone is available in a variety of colors and multiple finishes including glass, the former having an AG coating while the latter has a metal nameplate. You also have the Harman Kardon logo at the top near the speaker grille.

The Mi 11 has a 6.81-inch curved screen with a hole in the top left corner of the screen and Corning Gorilla Victus protection. The screen is not only bigger than the Mi 10 5G but also sharper as it has a 2K resolution (3200 x 1440). It also has a refresh rate of 120Hz and a touch sampling rate of 480Hz. There are a lot of numbers and other parameters tossed about, but in a nutshell, the screen on the Mi 11 is one of the best in any smartphone in the world and DisplayMate has given it an A+ rating.

Xiaomi has reduced the battery capacity slightly from its predecessor, but you get a big improvement in fast charging technology. So you have a 4600mAh battery inside the Mi 11 with support for 55W fast wired charging, 50W fast wireless charging and 10W reverse wireless charging. It also supports Quick Charge 4+, Quick Charge 3+, and Power Delivery 3.0.

The Mi 11 has an in-display fingerprint, and apart from unlocking your phone and authorizing payments, Xiaomi says it can also measure your heart rate. There are stereo speakers tuned by Harman Kardon, dual nano-SIM support and both can be tuned to 5G, NFC, IR blaster, enhanced WiFi 6 and Bluetooth 5.2 with Qualcomm TrueWireless Stereo Plus. It runs MIUI 12 based on Android 11 out of the box.

Xiaomi three rear cameras. The main camera is a 108MP 1/1.33” sensor with f/1.85 aperture, 7P lens and 1.6Î¼m pixel size. There is a 13MP ultra wide-angle lens with a 123° field of view and the third camera is a 5MP 50mm telephoto macro camera. And for the front camera of 20MP which is embedded with a punchole design on the top left side.

The camera app is packed with lots of features, some of which you can’t find on other phones. There is a Super Night Scene video mode that lets you shoot videos in low light using the Night Mode. There’s also 8K video recording along with professional mode, Video LOG mode, support for the HEIF format, Cinematic Lens, and lots of classic film filters. The much-loved sky filter is also available.

The Xiaomi Mi 11 comes in Blue, Black and White colors. There is the Lei Jun Signature Edition which has a different finish (scodix crystal), a special retail box, and is only available in 12 + 256GB for Â¥ 4699 (Rp. 10 million). A plain version (SmokePurple) and a Khaki version made of Vegetarian Skin were also announced. However, only the first one is listed for purchase.

This phone doesn’t come with a charger but Xiaomi has a special Set Edition which includes a 55W GaN charger. This plan is available at the same price for a limited time, after which you will be charged an additional ¥99 if you want a charger.

Other accessories that Xiaomi announced for this phone include a textured case priced at Â¥ 99; a silicone case for 69, and a glitter case for ¥299. Xiaomi also has a package called Mi Care for 679 that provides two screen replacements and an additional year of warranty.

Mi 11 is pre-ordering today and will go on sale on January 1, 2021. If you decide to pre-order, you will be asked to pay a down payment fee first. The first 4,000 shoppers who pay the phone balance will get a customized Xiaomi jacket.

How Apple, Google, and Microsoft will kill passwords and phishing in...