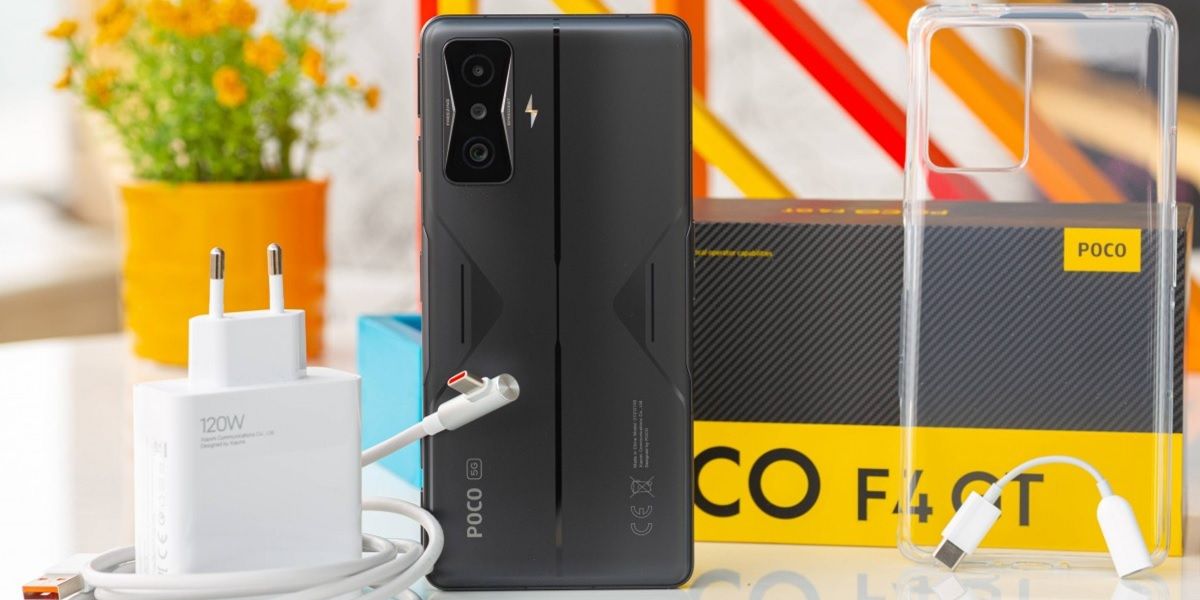 Xiaomi’s new mobile for gamers is official! The POCO F4 GT comes with the most powerful processor on the marketan insane 120Hz AMOLED display, and 120W ultra-fast charging that fills your battery to 100% in just 17 minutes. How much does it cost? €1000? Nothing to see. It costs half of that!

The Goboo store has partnered with POCO so you can buy the POCO F4 GT with a €100 discount during its launch (we’ll show you how at the end). Although it is designed for gamers, the fact that it is the cheapest Snapdragon 8 Gen 1 mobile on the market makes it a great option for anyone who wants a powerful smartphone.

All the specifications of the POCO F4 GT 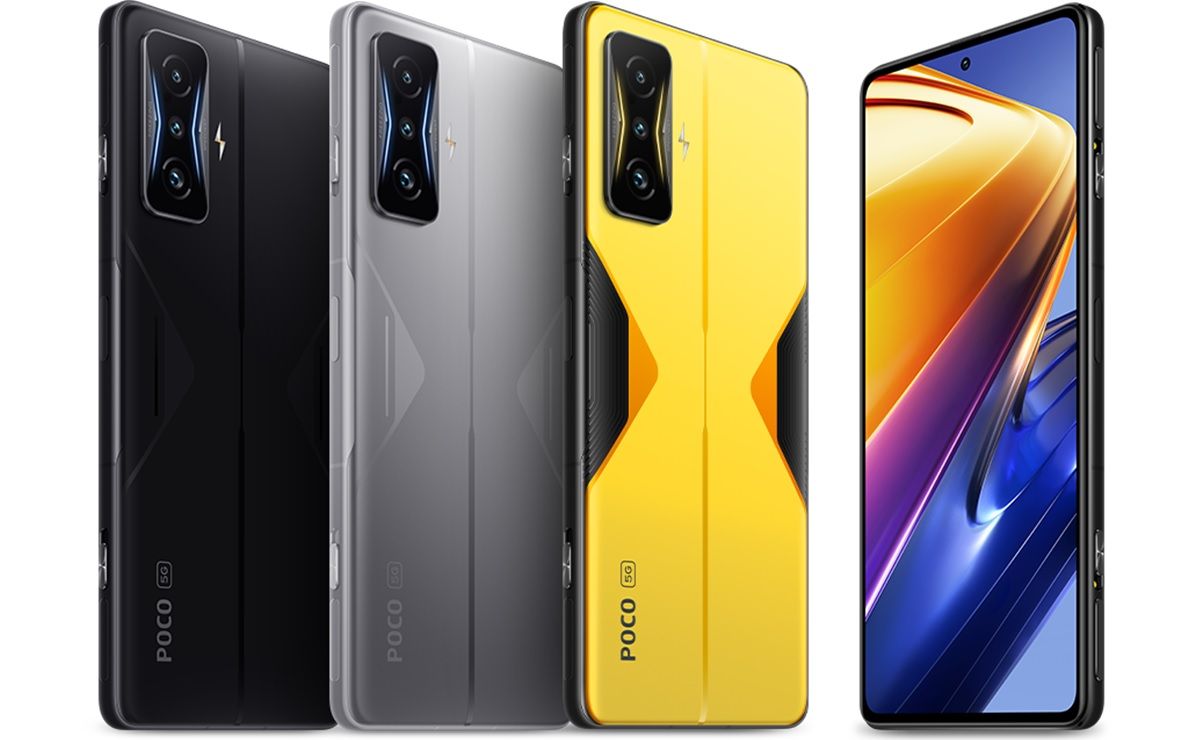 As we have already told you in other articles, the POCO F4 GT is nothing more than the global version of the Redmi K50G (mobile that is only sold in China). The only thing that changes is the name of the brand stamped on the lid. Other than that, it’s exactly the same phone. You can check it yourself in the following technical sheet.

The best performance you can ask for from a current mobile

The POCO F4 GT uses Qualcomm’s latest high-end processor: the Snapdragon 8 Gen 1. It combines it with up to 12 GB of RAM and 256 GB of storage in today’s fastest memory formats, LPDDR5 and UFS 3.1. The result? Lightning-fast and smooth performance both with games and demanding tasks.

And to make sure you maintain high performance during the most demanding times, it comes with a LiquidCool 3.0 cooling system consisting of two 4860 mm² vapor chambers along with a massive 6904mm² layer of graphene. Therefore, when you are playing games with ultra graphics, all the heat generated by the CPUs and GPUs will be dissipated immediately and you will not notice it on your hands.

Sporty design with an exceptional display 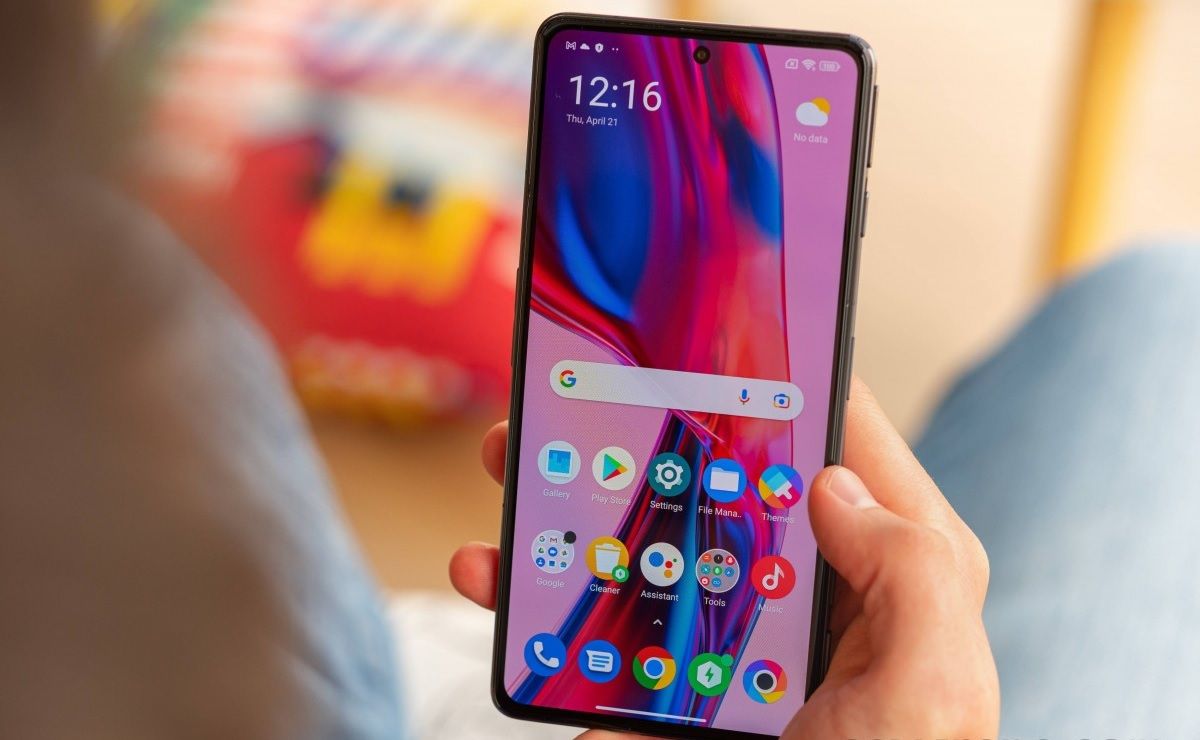 You can get the POCO F4 GT in the colors black, gray and yellow. All these variants have the same sporty design with triangular patterns and a body made of metal and glass. In fact, its panel is protected with a Gorilla Glass Victus, so in theory it can withstand drops of up to 2 meters in height. It should be noted that it has RGB lights on the camera module and a lightning-shaped LED flash.

Your fingerprint reader is on the side button, along with the retractable triggers (compatible with more than 100 games), and its front camera is at the top center of the screen. Regarding the screen, this is AMOLED and measures 6.67 inches. It looks amazing, so It has a Full HD + resolution and a refresh rate of 120 Hz. Besides, its touch frequency is 480 Hz, which means that it responds very quickly to touches. According to the brand, it offers a control precision 10 times higher than normal.

And not only that. The panel of the POCO F4 GT is compatible with Dolby Vision, reproduces more than 1 billion colors, supports HDR 10+ and has achieved DisplayMate A+ certification. It’s amazing image quality!

The fastest connectivities and top-notch audio 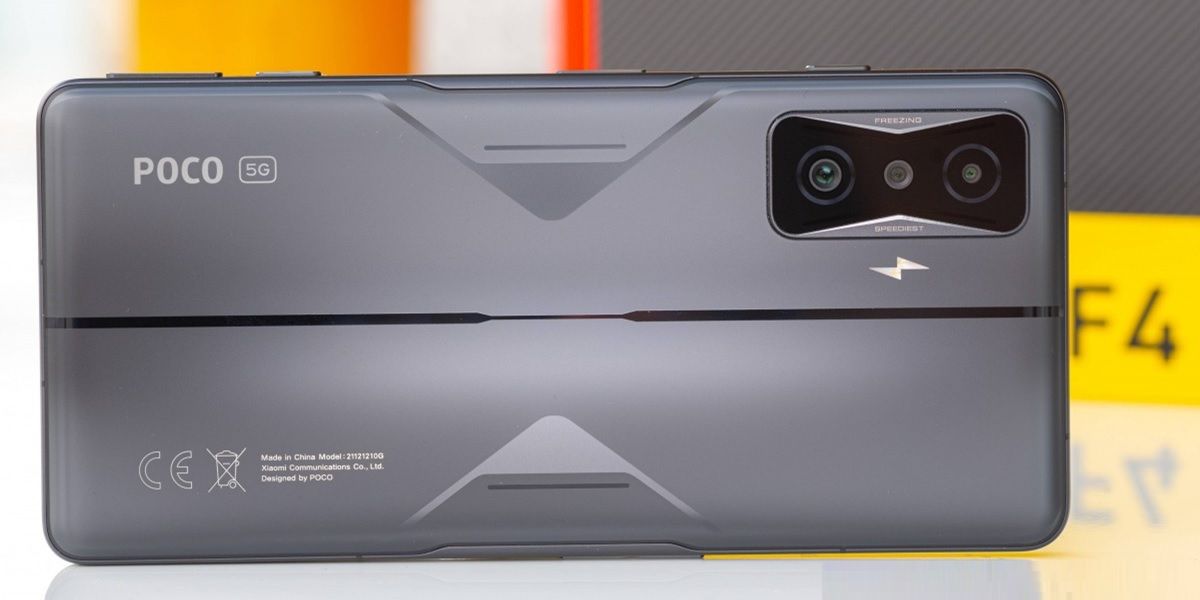 As if that were not enough, the mobile has WiFi 6E, 5G and Bluetooth 5.2, which are the most modern versions of each of these connectivity. Also, thanks to Multi-Link 5.0 technology, the POCO F4 GT can automatically switch the network you are using so you won’t experience micro-cuts or lag when playing online. How? Always connecting to the most stable and fastest network available to you.

As for the sound, mount four speakers to give you immersive stereo sound and quality while playing movies, series or games. In addition, it is compatible with Hi-Res Audio and Dolby Atmos: two technologies that significantly increase the audio experience.

oh! And has three built-in microphones to capture your voice clearly during calls, video calls and online games. 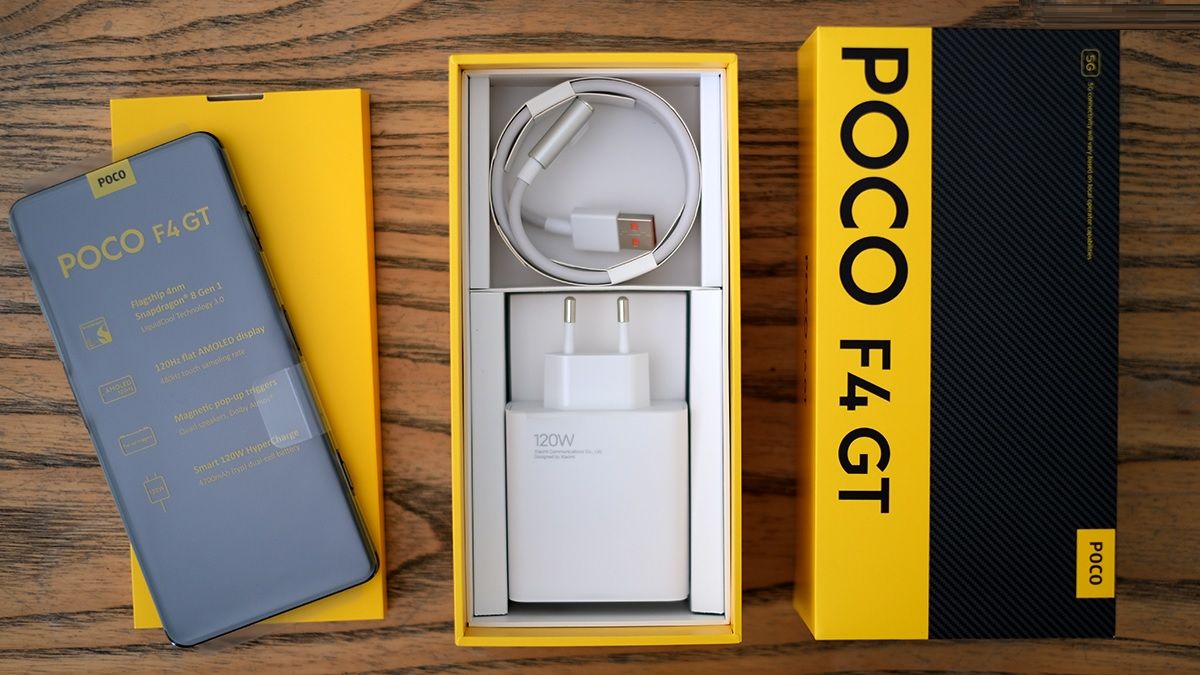 In the POCO F4 GT box comes a 120W charger and a 1.5 meter USB-C cable with “L” shaped tip (to play comfortably while charging). How long does it take to fully charge with this charger? Only 17 minutes with the screen off and the charging accelerator activated.

If you charge the mobile playing Mobile Legends Bang Bang with performance mode and charging accelerator activated, it will take 27 minutes. This is made possible not only by the 120W charger, but also by its 4700 mAh battery that is divided into two 2350 mAh cellswhich are loaded simultaneously for faster loading speed.

Triple 64 MP camera to capture the world as it is 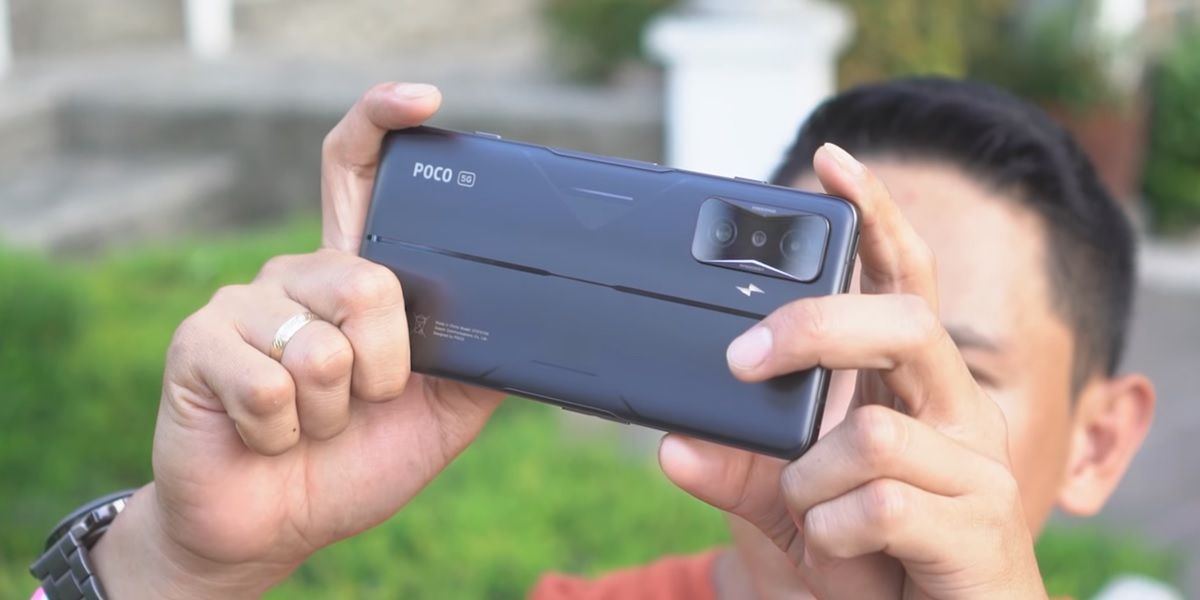 The camera of the POCO F4 GT lives up to the rest of the specifications. It has a 64 MP main camera followed by an 8 MP ultra wide angle and a 2 MP macro lens. It allows you take microscopic, panoramic (over 120°) and portrait photos with exceptional quality. Its 20 MP selfie camera also ensures great results.

Lastly, we can’t stop thank POCO for including factory MIUI 13 based on Android 12 on the POCO F4 GT. And it is that, many of the mobiles that Xiaomi and other manufacturers have launched this year, have come with Android 11.

POCO F4 GT price and where to buy it cheaper 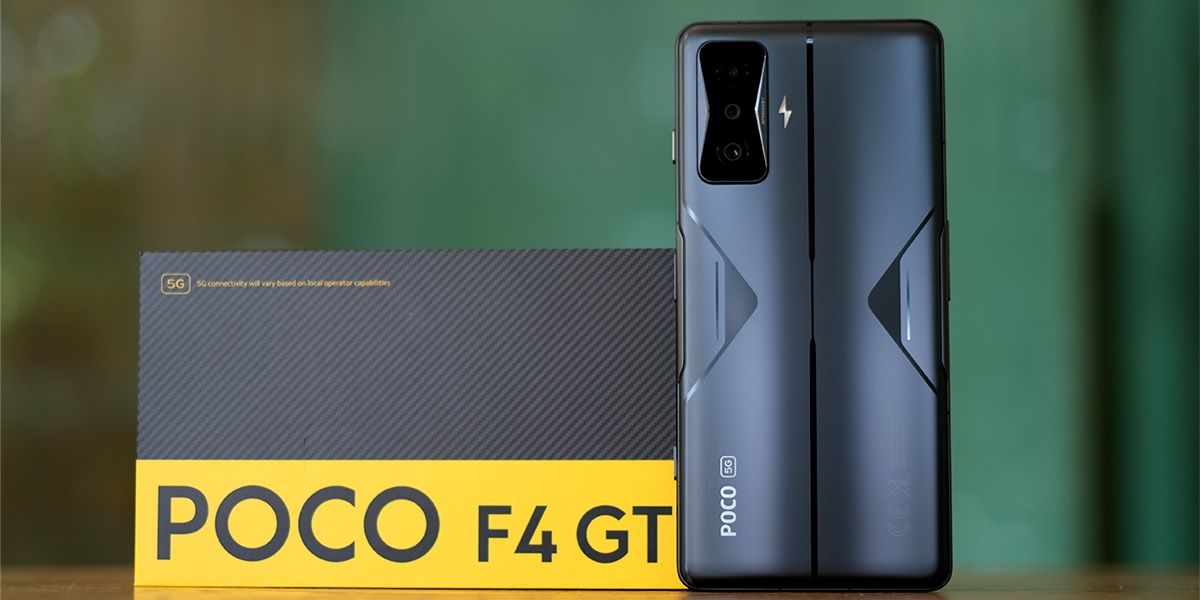 Shipping only takes one day for customers in Spain and the mobile includes 3 years of official guarantee. In addition, POCO gives you a free screen repair during the first 6 months from purchase. By the way, you can return it in 30 days if it is not what you expected.

Before you go, don’t forget to take a look at the POCO offers in the Goboo store for the launch of the POCO F4 GT. There are mobiles from €155. Watch them using this button: