Droidsnipe – Android, iOS, Tips and Tutorials, Apk Download
Home News Snapdragon 888 – New Qualcomm Chipset for Android 5G 2021
This flagship Android smartphone chipset will be launched in 2021. Snapdragon 888it not only integrates a 5G modem but improves CPU and GPU performance up to 144 fps and 4K gaming. 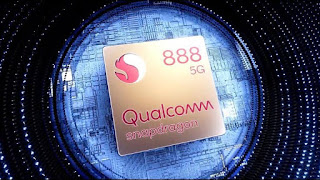 The Snapdragon 8xx family has long been Qualcomm’s flagship chipset, found in the smartphone flagships of most Android OEMs. For 2021, as we’ve seen in recent years, there’s focus on a few key areas: 5G of course, but not only 5G but also AI, camera technology, and gaming. Devices using Snapdragon 888 are expected to arrive in Q1 2021.
Snapdragon 888 and AI performance
In the case of Snapdragon 888, there is a Qualcomm Kryo 680 CPU with a 25 percent increase in performance and a 25 percent increase in power efficiency compared to the Snapdragon 865. Built – by Samsung – on a 5nm process, it combines one < b>Cortex-X1 for maximum performance up to 2.84GHz, with three Cortex-A78 for everyday tasks, and four Cortex-A55< /i> for low power maximum efficiency processing.
Snapdragon 888 camera
On the photography side, the Snapdragon 888 is the first Qualcomm chipset to include three ISPs: triple concurrency, and triple parallel processing. Three individual camera sensors – wide, ultra-wide, and telephoto, for example – can be connected simultaneously, in video and still image modes, and have different AI workloads applied to them at the same time.
So you can use all three sensors to record 4K HDR video of each one, all at the same time, seamlessly switching between them in the final footage. Alternatively, you can take up to three 28-megapixel photos simultaneously, at 30fps ZSL. The combined trio of ISPs is capable of processing 2.7 gigapixels per second, and is 34-percent faster than ISPs on last year’s chipsets.
That raw power has many applications. You can capture a burst of 120 still images in one second, at a resolution of 12 megapixels, for example. Autofocus, auto-exposure, and auto white balance have now moved to AI, too, Qualcomm using eye-tracking research to figure out where people naturally look in images, and training all three to be more human-like when they see them. lock.
Low light support is now close to darkness, only at 0.1 Lux. There’s also 4K HDR with Computational HDR Video Capture, support for videos with extreme dynamic range. Snapdragon 888 supports 10-bit HDR HEIF shooting – so no more tone mapping to the relatively lossy 8-bit JPEG – preserving 1+ billion colors. Phone makers need to add 10-bit screens to actually display all those colors, but the data is there.
The same is true for the Staggered HDR image sensor. Again, the promise is a wider dynamic range with lower ghosting, though it does require dedicated hardware to enable those results. Qualcomm says it is working with sensor manufacturers to bring the technology to mobile. Big promise, though you’d be forgiven for remembering the same chipmaker’s enthusiasm for Dolby Vision on Android, something the phone maker still hasn’t taken advantage of (only to see the Apple iPhone 12 family beat them).
Snapdragon 888 For Gaming
For gaming, Snapdragon 888 is built on features such as 144 fps display support, 10-bit HDR, separately updatable GPU driver, and support for 4K screen. Qualcomm Quick Game Touch, for example, to improve response times, although gains depend on the game’s frame rate. At 60 fps, for example, you can see an increase of up to 20 percent; which drops to 10-percent at 120 fps.
Variable Rate Shading, meanwhile, puts the power of hardware where it’s most advantageous. This allows games to reuse color payoff in similar clusters of pixels – such as the sky – so the computations can be better applied elsewhere. Qualcomm says it can lead to up to 40 percent reduction in shaded pixels per frame, and up to 30 percent increase in overall game performance.
There’s also aptX Adaptive Audio support, along with Aqstic Audio and Dolby Atmos. The Snapdragon 888 will be able to power up to a 4K 60Hz display on the device, or a 144Hz QHD+ display, while also speeding up to an external 4K 60Hz display with HDR10 / HDR10 + and a color depth of 10 -bit, Rec. Color tone support 2020. Up to 16GB LP-DDR5 3200MHz memory is supported, and there’s Quick Charge 5, ultrasonic fingerprint sensor, and USB Type-C 3.1 support.
What Are Website Cookies?
Snapdragon 888 5G
It’s fair to say Qualcomm has been one of the most vocal 5G proponents, and it’s no surprise that Snapdragon 888 centralizes fifth-generation networks with a new integrated modem. The Snapdragon X60 Modem-RF is the company’s third generation mmWave and Sub-6 modem, now supporting downloads up to 7.5 Gbps and 3 Gbps uploads, depending on the network.
There is 5G carrier aggregation on top of FDD and TDD, along with FR1 and FR2 carrier aggregation in mmWave and Sub-6. With Global 5G multi-SIM support, there will be the ability to have multiple active lines on a single phone, be it for roaming purposes or to use your device for personal and work purposes.
Since 5G networks aren’t the only wireless you might want to connect to, Snapdragon 888 also supports Qualcomm’s FastConnect 6900 system. It has WiFi 6 and WiFi 6E 6GHz support, along with Bluetooth 5.2 with dual antennas. Again, as with some cameras and other features, adoption of the latest WiFi 6 standard also comes down to other factors, such as having access to the latest routers. However, Qualcomm is betting on power users demanding support for it in their 2021 flagship phones.