Droidsnipe – Android, iOS, Tips and Tutorials, Apk Download
Home Android Origins of Android that was originally designed not for smartphones

KOMPAS.com – Google has just released the first beta version of the Android 13 operating system (OS) to the public. Android 13 is the successor of Android 12 which was released in October 2021.

For almost the last 15 years, Google has routinely launched its own operating system. Now, Android has also succeeded in becoming the most widely used mobile operating system in the world, beating iOS, Windows, KaiOS, and other OS.

Behind its success as a mobile OS, did you know that Android was not originally designed as a mobile operating system?

Not for mobile phones, Android was originally developed as a digital camera operating system. This was revealed when the co-founder of Android, Andy Rubin, delivered a speech in Tokyo in 2013.

According to Rubin, at the beginning of development, he dreamed of creating a “smart camera” platform using Android. The platform allows the camera to be connected to a PC, including online photo storage in the cloud.

In April 2004, Rubin and other Android founders had met with investors to promote the digital camera platform with Android.

In one slide presentation, the camera platform is mentioned to be connected via cable or wireless with a PC at home. Next, the PC will be linked to the Android data center.

Also read: Google Removes All Android Statues from Its Head Office, What’s Up?

Turned into a mobile OS in 5 months

However, at that time, the growth of the digital camera business was slowing down because the technology had started to market. So, Android was not launched as an operating system for digital cameras.

Rubin and his friends also chose to change the course of their business. From a digital camera, Android has been transformed into an operating system for handset aka cell phone in just five months.

The first version of Android 1.0 itself was first released to the public in November 2007 ago. Since then, Android has also released more than 10 major versions of Android to date.

Some of the most popular versions of Android according to Statista data are Marshmallow, Nougat, and Lollipop. Since its launch about 15 years ago, Android has transformed a lot, from the interface to the features it brings. 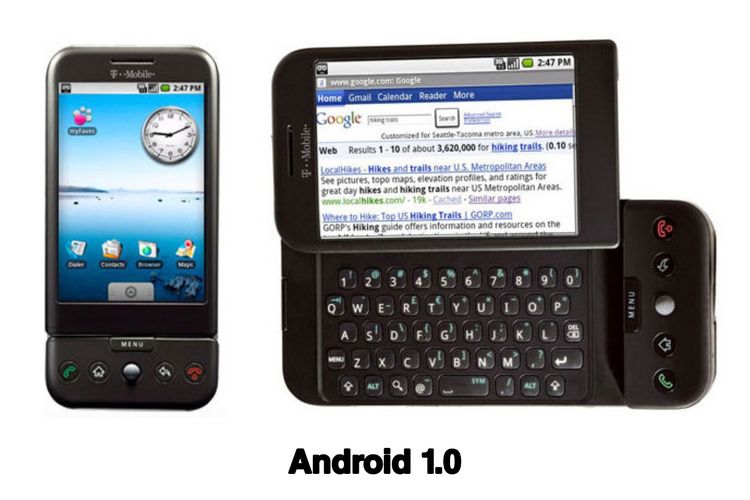 Computerworld Android 1.0 homepage display and a rudimentary web browser (not yet called Chrome).

Rubin said, at that time, he was actually worried that Android would have to compete with software made by Microsoft (Windows) and Symbian (Nokia).

However, Rubin saw the opportunity for Android to grow if it entered the smartphone market, which at that time was said to be growing rapidly.

From the start, Android thought of its products as a platform for selling other services and products. That’s why Android is more eyeing growth prospects, rather than revenue per unit.

Also read: The Love Story Behind the Resignation of the Father of Android from Google

For that reason, Rubin finally decided to make Android an open source operating system (open source). This means that the Android source code is released to the public so that it is available and can be used by the public for free.

“We want as many phones as possible using Android. So, instead of charging 99 US dollars or other nominal to use Android, we chose to give it for free,” said Rubin.

“Because we know this industry (mobile phones) is price sensitive,” he added, as compiled by KompasTekno from PCWorld.

Because it is open source, Android can be easily applied to many devices, such as mobile phones, smart watches (smartwatches), televisions, and others.

In addition, because it is publicly available and free, application developers can also easily create applications for Android. If you look at the current success of Android, Rubin’s strategy at that time could be said to be right. Now, the Android project, which was initially only targeted at controlling 9 percent of the market share in North America and Europe, now dominates in the world.

According to Statista data, Android managed to dominate the market by controlling almost 72 percent of the smartphone OS market share in the world in February 2022.

To find out the complete history and transformation of Android over the past 15 years, you can listen to it through the article “History of Android, from being rejected by Samsung to being bought by Google”.