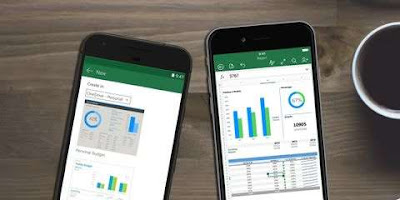 Need to open an Excel spreadsheet on your mobile device? Whether it’s Android, iPhone, or iPad, it’s easier than ever! Find the right application for the job with this guide.

How to Open Sheets Natively

To edit spreadsheets on your phone, you may need to download one of the apps listed below. However, if you only need to view the document, you may be able to use the built-in tools.

How to Open Sheets Using Google Drive On Android

Most of the latest Android devices come preloaded with Google Play Services, which includes Google Drive. You should be able to open Excel files natively using this function – if not, check out one of the apps featured in this article.

How to Open Sheets as Email Attachments on iOS

Android users have many ways to transfer files to their devices, but on iOS it’s not that easy. However, it’s still relatively easy to open a document sent to you as an email attachment.

Simply open the attachment itself from the Mail app, then press the button in the lower right corner.

This will give you some advanced options. Scroll through the center bar of icons to find the app you want. You will be able to import content into the editor of your choice.

Of course, the app itself offers other methods for opening files. The examples in this article even support cloud-based file storage. It’s just a quick and easy way to receive and open spreadsheets from other users on iOS.

5 Technology Trends That Will Change the Future

Most likely the spreadsheet you are trying to view was created with Excel, so why not use a program that same for true continuity?

Microsoft has made no secret of its intention to bring mobile devices closer to the desktop experience with the release of Windows 10, and many improvements were made to the Office suite as part of this effort. While the previous mobile app was very limited compared to the desktop version, the current Excel app for iOS and Android is very robust.

There is one caveat, however – although the app is free, its capabilities depend on the type of Office subscription you have access to. Basic functionality is available to all users, but more advanced features require an active Office 365 membership.

One of the main drawbacks of the Excel application is its size. At over 400 MB in size, it might be too big for users working with limited storage space. That said, it excels and is shoulders above its competitors in terms of compatibility with desktop clients, its feature set, and its overall level of polish.

When it comes to free Office competitors, no one can really compete with Google. The company’s services are available across all platforms – including a powerful web-based client – making it highly accessible. What’s more, their collaboration options are in tight competition with Microsoft’s.

The Google Sheets app is a very powerful spreadsheet viewer and editor for smartphones and tablets. Even more so than the Excel application, its functionality has been adapted for use on smaller screen sizes. This is very useful if you use your phone.

The biggest benefit of using Google Sheets is its strong linkage to the broader Google ecosystem. It’s easy to access files from your Drive and share spreadsheets with other users. Multiple users can even work together on the same spreadsheet, at the same time.

While Citrix isn’t quite a name at the level of Microsoft and Google, the business communications giant is showing its talent at work with the QuickEdit app. The software allows you to view and edit Excel spreadsheets for free, and its very smooth interface may be more suitable for some users than the other applications listed above.

QuickEdit provides as much screen space as possible for the spreadsheet itself. To make this possible, minimalistic icons offer easy access to various functions. The button in the upper right corner ensures that the keyboard is accessible at all times. Meanwhile, the little swipe-up toolbar at the bottom of the screen contains quick links to formatting functionality, save and load operations, and a bunch of other essentials.

The app’s biggest failure is its outdated visual appearance. We expect business software to be a little dreary, but spreadsheets look less appealing here than in other apps. On the other hand, they are very clear and legible, although not as attractive.